To begin receiving quotes from a network of reputable sellers for used Geo transmissions, simply fill in and submit the form above. Within minutes, you’ll start seeing quote from our brokers. 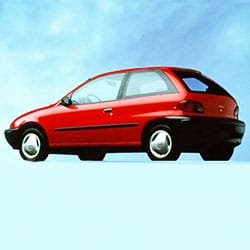 Formed by General Motors (GM) in 1989, Geo was a subdivision of GM’s Chevrolet division. Geo was meant to compete with the small car import market of the 1980s, though that market faded in the 1990s, and Geo was discontinued in 1997.

Some Geos continued under the Chevrolet brand, though the last of these (the Tracker) was discontinued in 2004. Geo cars were manufactured by GM in partnerships with Japanese automakers Toyota, Suzuki and Isuzu. The cars were available with three-, four- and five-speed transmissions in both automatic and manual.

Having been discontinued, many GEO engine & transmission parts are becoming increasingly hard to find.

Geo owners know that if they are going to stay with their unique brand of gas saving vehicle, they are going to need a couple of aces they can pull out in an emergency. We can help you find the parts you need with our free, online parts locator service at ASAP Motors.

Going to the local scrap-yard for a Geo transmission is getting to be a thing of the past. Even junkyards are taking advantage of our service. At ASAP, we find Geo transmissions for sale from our vast network of used parts suppliers from around the country. Often, our efforts turn up multiple options to choose from. With just a couple of clicks, you can find the transmission you need, purchase it and have it delivered to your house or mechanic shop in a few days time.

Fill out our quick questionnaire and we will get back to you promptly.

The Geo brand was a highly successful GM attempt at competing with the import market. Other U.S. manufacturers were trying the same things, but Geo cars were good enough to continue as Chevrolet brands even after the Geo name was discontinued.

Geo specialized in economy and compact vehicles, including hatchbacks, notchbacks and a convertible. Many models are known for their excellent fuel economy and reliability, making Geo a practical, albeit not flashy, auto brand.

General Motors has been making cars for more than a century, and Geo’s Japanese partners also come with decades of auto-making history. While Geo itself was short lived, drivers can be confident that Geo parts come from a reputable source.

When considering a used Geo transmission, our customers often have some specific questions:

Q: How much does a used Geo transmission cost?

Q: How can I tell if a used Geo transmission is slipping?

A: As with most transmissions, the signs that a Geo transmission may be slipping are a sense that gears are changing for no reason, engine noise may change pitch, difficulty accelerating and a bad smell.

Q: Is it true that Geo Tracker transmissions are problematic?

A: Some drivers have reported certain problems with Geo Tracker transmissions, including leaking fluid, transmission failure after only 50,000 miles and an inability to shift from first gear into second gear.

We highly recommend that you ask your broker many questions about the used Geo transmission. Many sellers offer warranties, though ASAP cannot guarantee this as we do not sell the parts ourselves.

The Geo Tracker debuted in 1989. When the Geo brand halted production in 1997, the Tracker went on as a Chevrolet vehicle until 2004. The Tracker was a low-cost SUV, meant to be an alternative to the Jeep. This car came with three-, four- and five-speed transmissions in both manual and automatic.

The Geo Metro was an economy car produced from 1989 until 2001 (under the Chevrolet brand after Geo shut down). It came in four body styles: three- and five-door hatchback, sedan and convertible. Over the course of its two generations, the Metro offered a three-speed automatic transmission and a five-speed manual transmission.

The Geo Prizm was produced from 1988 until Geo ended, and then went on to be the Chevy Prizm until 2002. The Prizm was a compact car that won a range of auto industry awards and offered upscale and sporty models in addition to the more traditional sedan. The Geo Prizm was available with three-, for- and five-speed transmissions in both manual and automatic.