Begin receiving affordable quotes from our network of reputable auto parts brokers on a range of used Saturn transmissions by filling in the form above. 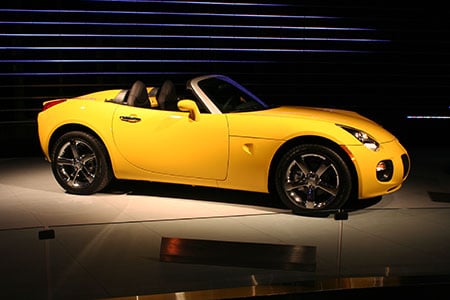 From its founding in the mid-1980s to its dissolution in 2009, Saturn was a subsidiary of General Motors. The brand was designed to compete with Japanese auto makers.

While Saturns were meant to be different from other GM cars, and many were made in a totally separate manufacturing plant, a Saturn transmission is, in reality, a GM transmission.

From regular oil changes and tune ups, to rotating your tires and making sure your car is fueled with the best gas, there are many things you can do to ensure the longevity of your Saturn. Even though you may take many precautions against damage happening to your car, sometimes there are car problems that arise with your vehicle that are out of your control. For example, what happens if the transmission gives out on your car and you find you are suddenly without working transportation? Where do you turn for help when you need to find a place that has Saturn transmissions for sale? Well, if you visit the nationwide networks of suppliers listed at Asap Motors, you will be able to find a variety of replacement used Saturn transmissions for sale with just a few clicks.

At ASAP Motors, we specialize in providing a nationwide database of suppliers that can give you the choice of a variety of used Saturn transmissions. With the help of our website, you will not have to search around town for your transmission because we have all the resources you need through our website. Simply visit asapmotors.com and fill out our easy form that only takes between 10-15 seconds to complete, and then just sit back and wait for the offers to be emailed to you. Wait for deals on price, warranties and locations without ever leaving the house and in no time at all, the perfect used Saturn transmission will be yours.

There is no fee for our service, nor will you have to make any sort of obligation. We simply connect you with a network of nationwide suppliers that want to help you get the transmission you need to get out on the road again.

From a five-speed, manual MP to a four-speed automatic via the L-series, ASAP Motors has the used transmission you need.

Saturn vehicles had a good start when they first debuted. As an answer to Japanese cars, they were small, affordable and fuel efficient (especially those with manual transmissions).

Later on, the Saturn brand was expanded with an SUV, the Vue, and a hybrid, the Vue Green Line. The overall quality was improved, and the brand offered options that went beyond compact size and affordability.

Q: How much does a used Saturn transmission cost?

A: Depending on the make, model and year of your Saturn, the prices of used transmissions will vary. However, in general, you can expect to pay somewhere between $150 and $1500 for a used Saturn transmission.

Q: Will my used Saturn transmission lag when I shift into reverse?

A: This is a issue that’s been reported with high mileage automatic transmissions (over 100,000 or so). This may be because the reverse valve is made of a relatively low-grade cast aluminum and subject to wear.

ASAP motors makes no warranties on the used transmissions our brokers sell, although many suppliers sell parts that are paired with warranties. We strongly encourage buyers to ask many questions about mileage, performance and concerns when selecting used transmissions. Some brokers do provide warranties.

Q: Is it common for Saturn transmissions to slip between gears?

A: Certain Saturns have been reported to slip between gears, which can be a sign of a serious transmission problem and needs to be addressed (especially with automatic transmissions). The issue is usually with the clutch in a manual transmission.

Talk to your used transmission broker about all aspects of your Saturn used transmission to determine if it’s had any performance issues in the past. Issues may be easily fixed with fluid changes or require more extensive repair.

Q: What are common signs that something is wrong with a Saturn transmission?

A: As with any transmission, a troubled Saturn transmission may take too long to shift into higher gears, accelerate slowly or shake. Also watch for burning smells, grinding, clunking, leaking fluids and whining sounds.

These are the three most purchased used Saturn transmission models that our customers are interested in finding:

The Saturn Sky was manufactured from 2006 to 2009. This roadster is known for large wheels, a turbocharged engine and bright, metallic colors. A departure from the more practical Saturn model, the Sky appealed to enthusiasts with a retractable roof and two seats. The Sky was offered with five-speed automatic and manual transmissions.

The Saturn Aura was a midsize sedan produced from 2006 to 2009. Winning North American 2007 Car of the Year, the Aura was designed to compete with European imports. With perks like backseat controls, heated seats and remote vehicle start, certain Auras were a step up from earlier Saturn models. The Aura was offered with four- and six-speed automatic transmissions.

The Saturn Outlook was a midsize crossover SUV manufactured from 2006 to 2010. It offered enough seating for eight people, and the second and third rows have split-folding seats. The Outlook received five-star safety ratings from the National Highway Safety Administration, and was a Top Safety Pick by the Insurance Institute for Highway Safety in 2008 and 2009.  The Outlook came with a six-speed automatic transmission.

ASAP Motors is ready to help you find the exact transmission you need, no matter the price points or models you’re working with.