Within minutes of completing and submitting the form above, you’ll begin receiving quotes from the auto parts brokers in our reputable network. You get these quotes via phone, email or text. 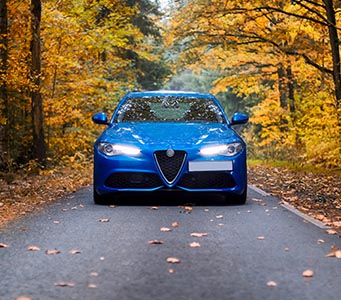 Alfa Romeo’s beginnings were in Italy in 1910. French car maker Darracq had maintained a plant in Milan since 1906, and the plant’s managing director, Cavalier Ugo Stella acquired the plant in 1910. Stella founded a new brand, Anonima Lombarda Fabbrica Automobili – also known as A.L.F.A. During the economic difficulties of WWI, electrical engineer Nicola Romeo purchased A.L.F.A., and Alfa Romeo was born.

Historically known for racing and sports vehicles, Alfa Romeo also represented class, comfort and elegance by the 1960s. The iconic Spider was even featured in the movie “The Graduate.” After Alfa-Romeo got back into racing, they soon became the car to beat in Grand Prix Events. The 158 Alfetta won the first Formula One Championship back in 1950. In 1952, Alfa-Romeo began working on its first front-wheel drive automobile. That did not go into production for a few more years. By the 70’s the automakers was in trouble again, and this time Fiat stepped in. They began to build Alfas and Lancias into the 90’s era of vehicles, developing a new car in the process, the 147 GTA, and other high performance vehicles.

In 2005, more changes came about when Fiat bought Maserati back from Ferrari and formed four new automobile companies by 2007. They planned to build sports cars and luxury cars combining the two platforms. This division would share the drivetrain, including the framing, and would offer both makes in the dealerships.

Still in production today, Alfa Romeo continues to produce racing-inspired vehicles, as well as elegant sedans and functional SUVs. With a history of developing car, aircraft and marine engines, Alfa Romeo has a reputation for implementing new technologies in making powerful engines.

Whether you need a twin-cam engine or a V6 – both long-running engines from Alfa Romeo – ASAP Motors is ready to help you find the perfect used engine.

After more than a century of building all sorts of powerful engines, Alfa Romeo remains a brand associated with lightweight power, style and class. The vehicles are also fun to drive.

Alfa Romeo’s reputation for innovative technology also continues. From safety to agility to elegance, the brand is willing to try and test new and exciting solutions.

Two of the most well-known engines from Alfa Romeo are its Twin Cam and V6 engines. Produced from 1954 to 1994, the Twin Cam is an all-alloy inline-four engine made for a range of racing cars. The V6 was made from 1979 to 2005 and was called “the most glorious-sounding six-cylinder road engine ever” by British auto magazine, “Evo.”

When considering a used Alfa Romeo engine, our customers commonly ask these types of questions.

Q: How much do used Alfa Romeo engines cost?

A: The price of your used Alfa Romeo engine will depend on its year and model. However, customers can generally expect to spend between $400 and $1,500.

Q: Are Alfa Romeos sold in the United States?

A: It’s true that stereotypes exist about Italian-made cars. While there is plenty of good about Alfa Romeo vehicles, many reports have deemed them relatively unreliable. Because this is not an U.S.-based manufacturer, it may also be difficult to find a mechanic.

Produced from 1987 to 1998, the Alfa Romeo 164 was a saloon-body executive car available in both gasoline and diesel engines. This was the first Alfa Romeo model to extensively use computer-aided design. The 164 was available with Twin Spark, turbocharged and V6 engines.

The Alfa Romeo Spider was produced from 1966 to 1993. While the roadster model was made for almost 30 years and in four generations, it saw only minor changes in that time. Consistently using the Twin Cam engine, the Spider retained its sporty appeal throughout its production.

The Alfa Romeo Alfetta was a rear-wheel drive executive saloon car and fastback coupe. It was made from 1972 until 1987, and featured a new drive train layout with the clutch and transmission at the rear of the car. The Alfetta came with two four-cylinder DOHC engines.